A three day trip to the long island in the east coast of China, the Changdao will be remembered for the scenic beaches and the unique rock formations.

We had by now done few FCN (Foreigners China, Laowai) trips and the one in the long weekend of April 1st, the Tomb sweeping day, looked great. The title said “romantic island trip” which meant that it was for couples, but we didn’t mind. The biggest advantages with trips like these are: the low expense, no hassle of planning and ease of communication. It also gives an opportunity to make new friends across different nationalities.

The Changshan Islands, also known as the Temple Island or Miaodao are 32 islands located between the Bay of Bohai and the Yellow Sea. In Chinese, they are also known as the “Long Islands” (Chángdǎo) and, anciently, as the “Islands of the Sandy Gate” (Shāmén dǎo).

Changdao area is well known for the eight immortals. These find a celebrated place in art and culture, mythology and legends of China. According to a legend told by Grace, our amicable tour leader, this happened about 1000 years ago. Shamen Island was the place where prisoners were kept during the Song dynasty. There was a time when the number of prisoners increased, thus leading to scarcity of food. This led the emperor to order that food would be given to only 300 prisoners, and that the remaining ones would be executed.

On one of those days, a group of 50 prisoners was selected to be executed. Once the prisoners came to know about this, they planned a great escape out of Shamen Island by crossing the Bohai Sea to Penglai Island. Out of the 50 prisoners, only 8 survived. Their story was passed on to locals, who called them the Eight Immortals Who Crossed the Sea. It is said that they swam across the sea, but pictures depict them in a boat. It is also said that each of the eight immortals used a unique power to cross the sea. Subsequently, these characters became household names, considered as genies, fairies, celestials and figured on innumerable artefacts.

Hari, Vamsi and I boarded the bus at Huixinxijienankou subway station at 7.20pm. It was going to be long journey. There were three leaders and a photographer from FCN. The organizers circulated a cute handwritten information sheet. The group size was 32. We reached Penglai around 6 am and caught a ferry to Changdao. It took about 50 minutes to reach the dock and then a bus journey to the hotel (Fishing Inn). After freshening up, was the trip to Temple Island by the sea. We started around 8.30am. The ferry ride was very scenic, with so many Sea Gulls flying close to us. Some people offered them food and they pick it up. The sight of different rock formations was amazing. We got down around 11.30 and visited a pagoda and a temple. We roamed around the Park and saw the place where the Bohai and yellow seas meet. The beach had pebbles instead of sand. The team spent lot of time on the beach taking photographs. We came back to the hotel and had dinner which was more of seafood as expected. We could witness the sunset on the hills opposite to the hotel. That evening a barbecue party was organized, but I skipped as I was sleepy. 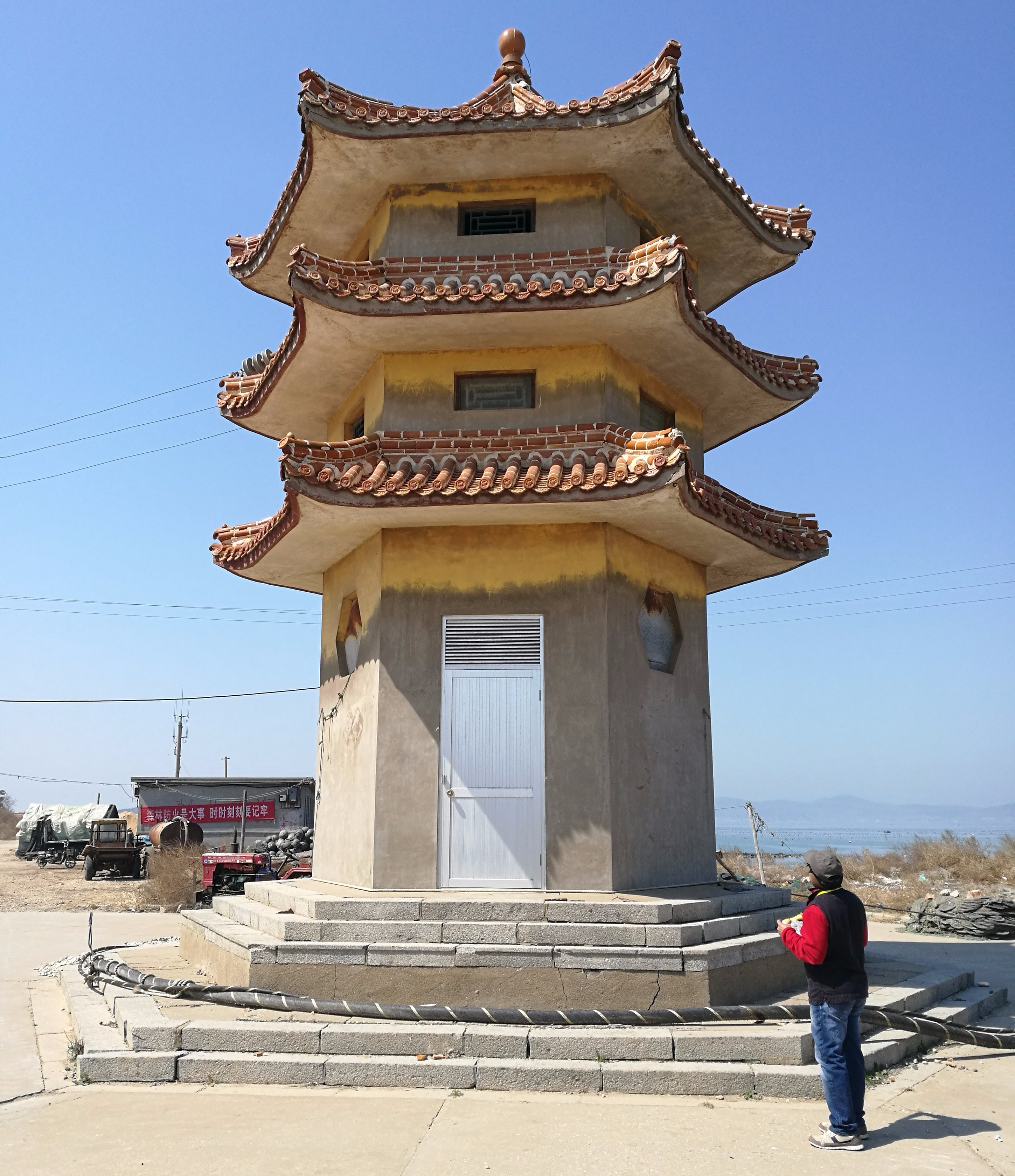 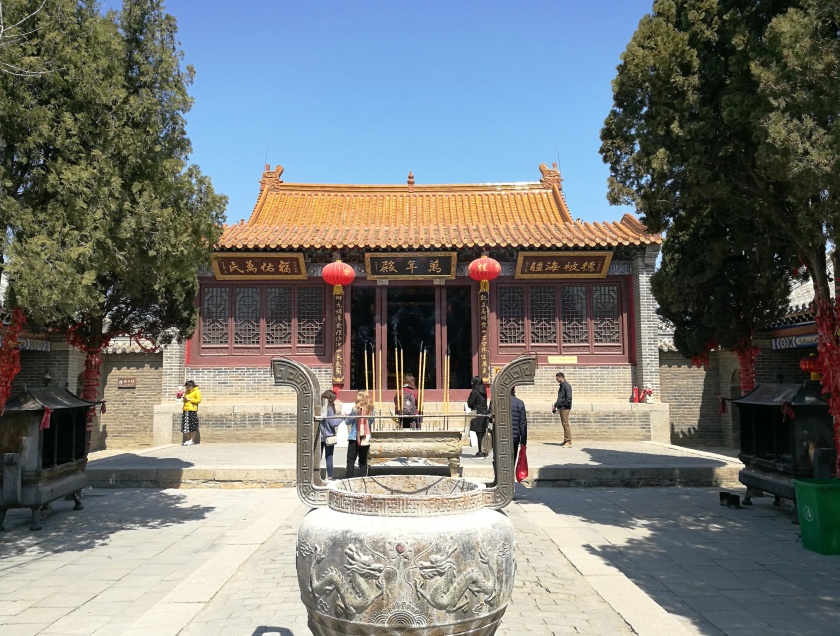 Next morning we had breakfast and took a group photo in front of the hotel. After that, we took the bus to Jiuzhang cliff. This is formed by the accumulation of sedimentary rocks while the Himalayas were made 100 million years back. The cliff body is 400 meters long and 100 meters tall, mainly made of quartzite with slate. The rock formations are named differently based on their shapes. There is a statue of the Goddess of Mercy in one of the clefts.

We moved to the Qilu coast which is one of the most spectacular beaches in China. It has a long curvy beach also known as crescent moon. There are many statues nearby, the remarkable one is of Hou Yi, with a bow indicating that he has shot a star. Hou Yi, was a mythological Chinese archer. He was also known as Shen Yi and simply as Yi. He is the god of archery descended from heaven to aid mankind. A legend told by Grace is that when 10 suns rose from the Earth and scorched the fields turning the world into a wasteland, Hou Yi shot down 9 of the 10 suns, leaving the last one alive. The holy mother was pleased with Hou Yi’s act and gave him and his wife Chang’e two pots of medicine that would make that would make them immortal and forever young. But Chang’e, was selfish, and ran to the moon with both the pots as she was a lunar deity. She then felt ashamed of her act and stayed in moon, making moon cakes every time she felt lonely and missed her family. Moon cakes are eaten now during the Mid-Autumn festival to commemorate this event.

One of the attractions on the beach is the seal show. There are many seals playing in this area and people feed them with fish. There are also private seal performances at extra cost. It was close to noon and people from our group also danced on the beach. We roamed around further around the Wang Fu reef/rock. The Wang Fu rock was earlier called “the reef of waiting for husband” and now “the reef of expecting luck” following similar Chinese spelling. The rock looks like a fisherwoman staring far away calling her husband home. It is also supposed to be the sea goddess Ma Zhu standing there to protect the fishing people of the area. There is a very beautiful watch tower and a bridge that is supposed to make one immortal! We roamed around the place till 5pm and returned to the hotel. The dinner was around 5.45pm. We participated in the barbecue party that evening that went from 8 to 11 pm. Many people danced. It was a good occasion to know others.

Next morning the breakfast was at 7am and we left for Beijing. There was a stopover at Penglai for half an hour around 9 am to see the place. The town is well planned and neat, like any other Chinese town. There is a statue of the eight immortals close to the beach. There is also a World Peace Gong (created by the UN in different countries to mark world peace after the 2002 Bali bombing) a musical drum that has flags of 202 countries.

It was along return journey after that, and unlike while going, this was a day journey. We were dropped near Shilihe subway station that was not far from home.

The trip to the long islands is memorable for the scenic beauty as well as the lovely company we had during the FCN trip. We made many new friends during the trip. The organizers led by Grace were awesome.

Fun loving person with equal fascination towards nature, science and fine arts. I am in Beijing since December 2015 and love every bit of the time spent here getting to see places and know the culture. View all posts by balubandodkar

2 thoughts on “Trip to the ‘Romantic’ Long island”

This site uses Akismet to reduce spam. Learn how your comment data is processed.